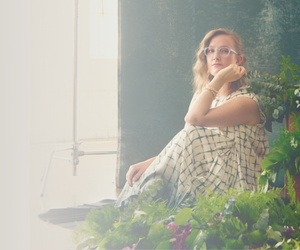 “I believe in paradox,” says Sarah Hiltz, reflecting on the oxymoron that makes up the title of her latest album, CALM FURY. “I can hold both of those feelings at once.”

The new collection of songs grew out of Hiltz’s work on ‘The Fury Project,’ a period of deep research around anger and its various origins and connections. After more than three years spent absorbing literature, articles and other sources of media, as well as interviewing experts, friends, family, and fellow artists, Hiltz is sharing the music inspired by her research along with The Fury Pod, a new podcast that deep-dives into the topic of anger and how it intersects with our lives through conversations with a series of guests.

Part of the research project involved attending a residency at the Banff Centre for Arts and Creativity in 2019, where Hiltz first met and worked with Howard Bilerman (Arcade Fire, Leonard Cohen), who would go on to engineer and co-produce the recording with Hiltz at his studio in Montréal.

In addition to Bilerman and assistant engineer Shae Brossard, Hiltz gathered a stellar cast of collaborators into the fold with the aim of being less fixated on capturing a particular sound or arrangement for each song and instead focused on working with people who she felt would earnestly engage with the subject and reflect it through their own performance.

Colleen Brown (keys/vocals – of Major Love), Tara Kannangara (trumpet/vocals), Charlotte Cornfield (drums/percussion), and Connor Walsh (bass) made up the core players on the album, while Sarah Thawer sat in as drummer on a couple of songs and Rachael Cardiello (Zinnia) joined on backing vocals. Bruce Cawdron (Godspeed You! Black Emperor) added vibraphone, marimba and tenor glockenspiel across the album, Drew Jurecka arranged and recorded strings, and Nashville favourite Fats Kaplin offered up atmospheric pedal steel on the album opener Retching In The Wings, which tells the story of Sinead O’Connor’s infamous appearance at Madison Square Gardens in 1992.

Hiltz recalls seeing footage of the moment O’Connor faced a boo-ing arena crowd before exiting the stage: “I recognized myself in her collapse, because that’s how I feel when I choose to express anger—it always costs me something, both energetically and emotionally, and often socially too. I’ve found that’s a common experience for a lot of women, and I knew I wanted to somehow capture that incident in song form.”

Other tracks recount angry anecdotes of Hiltz’s personal experience, like Love & Retreat, which sets the stage with an all-too relatable first line foreshadowing the conflict to come:

We talk religion, politics,
All of the things
That families ought to resist,
After dinner’s finished

Swim, on the other hand, offers up a meditative mantra derived from Hiltz’s own practice of attending her local lane swim to work through repressed emotion. “I often showed up in a state of either depression or anger, and moving my body through the water helped to refocus me on the tactile and on the present moment”:

Why all this focus on the experience of anger for the generally quiet, even-keeled songwriter? “I realized I actually don’t know how to express anger in a healthy way, no one ever taught me how to do that," Hiltz shares. “When I told people that I was researching anger for the sake of writing songs, they assumed I was going to be experimenting with lots of distortion on my guitars, or other kinds of sounds we typically associate with angry music. But I want to highlight the fact that anger can look and sound like different things in different people. It’s expressed in different ways.”

And so she set out to learn as much as she could about what it means to feel and express anger for all kinds of different people, in both healthy and unhealthy ways. The resulting body of work bears witness to an artist who has not only come to terms with her own anger, but who is willing to embrace it when called for. It comes through on songs like As Long As You’re There, the heart wrenching ballad that describes deep, unconditional love, but is set against the backdrop of the fury-inciting housing crisis in Toronto, and May I Rage, May I Love, which Hiltz has described as a kind of permission slip, written to essentially commission herself to anger in pursuit of justice, wholeness and love-in-action:

Hiltz’s craft as a songwriter grew from a desire to bring nuanced expression to complex situations, and her lyrics often live in the tension between two seemingly-opposed truths. Her previous album, Beauty In The Blue, centred around the theme of finding beauty in moments of hardship, so it’s no surprise the artist didn’t hesitate to dive into the subject of anger, in spite of the discomfort it might cause. “We are all human beings meant to experience the breadth of human emotion, including anger. That doesn’t have to be negative or even divisive. It’s true it might be uncomfortable, but discomfort and danger are not the same thing."

Sarah Hiltz has independently released four full-length albums and two EPs since 2009. Her work over the last decade as a talented singer-songwriter has landed her Folk Music Ontario’s Songs From The Heart Award (Political Category), opening slots for Canadian icons Gordon Lightfoot and Ron Hynes, Top 3 placement in a nation-wide music competition (She’s The One), a Best Folk Album nomination (Toronto Independent Music Awards) and earned her an invitation to give a TEDx talk in 2014.

She Does The City

Press for Beauty In The Blue

Music Musings and Such (UK) (interview)